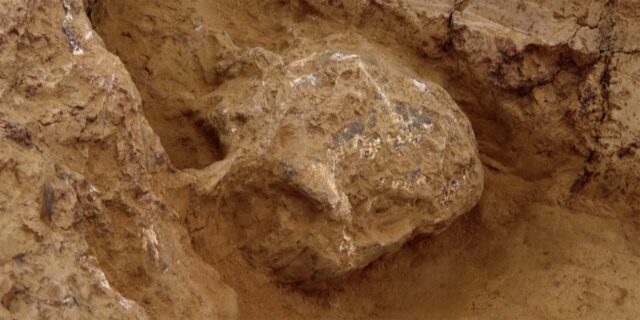 A largely undestroyed human skull fossil dating back 1 million years was found in the central Hubei province, adding to key evidence of human origin and evolution in China and the rest of East Asia.

The skull was found at the same site where the first two such skulls dating from 800,000 to 1.1 million years ago were excavated between 1989 and 1990. However, they were found to be severely deformed due to stratigraphic pressure.

The three fossilized skulls are believed to be around 1 million years old based on preliminary studies, with all of them belonging to Homo erectus, an extinct species of archaic human from the Pleistocene period that ended 11,700 years ago. The three skulls were named “Yunxian Man,” after Yunxian, or Yun County, where they were found.

The exposed parts so far indicate that the third skull’s appearance is well-preserved, making it the most complete skull fossil of its kind found in the Eurasia region so far. Archaeologists expect to fully unearth the latest skull fossil from the ground by November, which could help fill in a missing gap in the evolution of Homo erectus in East Asia.

Archaeological findings at the Zhouqiao Bridge in the central Henan province showcase the evolution of the ancient city of Kaifeng, spanning over six ruling dynasties in about a 1,000-year time period.

The bridge was built between 780 and 783 in the Tang Dynasty (618-907) across the Grand Canal, the world’s longest artificial waterway connecting the northern and southern parts of China. It was buried by sediment when the Yellow River flooded during the Ming Dynasty (1368-1644).

The four-year excavation at the Zhouqiao site has revealed layered remains from different Chinese dynasties stacked up on top of each other. The site’s stratigraphic age is found to span from the Tang Dynasty to the Qing Dynasty (1636-1912) from bottom to top.

“Bridges were piled on bridges and roads were piled on roads from different periods, forming a spectacle of ‘stacked cities’ in Kaifeng,” said Liu Haiwang, head of Henan’s provincial archaeology institute.

Large stone murals from the Northern Song Dynasty (960-1127) were also discovered along the banks of the Bianhe River, part of the Grand Canal. The carvings, with patterns of auspicious creatures, cranes, and clouds, are the largest of their kind from this period ever found in the country and demonstrate the highest level of stone-carving techniques at that time, according to Wang Sanying, director of the Kaifeng Archaeology Institute. An aerial view of the archaeological site in Yunnan. Xinhua

The archaeological discoveries in Yunnan add to evidence that officials from the Western Han Dynasty had governed the then remote areas, which now include the southwest province.

The dynasty that ruled China from 202 B.C. to 8 A.D. had its capital in the present-day Shaanxi province, about 1,500 kilometers away from Yunnan. But excavation work at provincial capital Kunming found over 500 pieces of bamboo scripts and seals of Han officials and individuals dating back to the period, suggesting the dynasty’s authority expanded far beyond its capital and nearby areas.

The archaeological site is said to be a core area of the ancient Dian culture, and a golden seal of the Kingdom of Dian was unearthed about 1 kilometer northeast of the relics. Dian was an ancient kingdom established by the Dian people in the now Yunnan province, which was assimilated as the Han dynasty expanded.

“These discoveries reflect the central government’s authority over the frontier areas at that time, and add archaeological evidence to the fusion and development of a multi-ethnic state in China,” Jiang Zhilong, researcher at an archaeology institute in Yunnan, told state-run Xinhua News Agency.

(Header image: The third skull of the roughly 1-million-year-old human skull fossil is found in an excavation site in Hubei province, 2022. Xinhua)