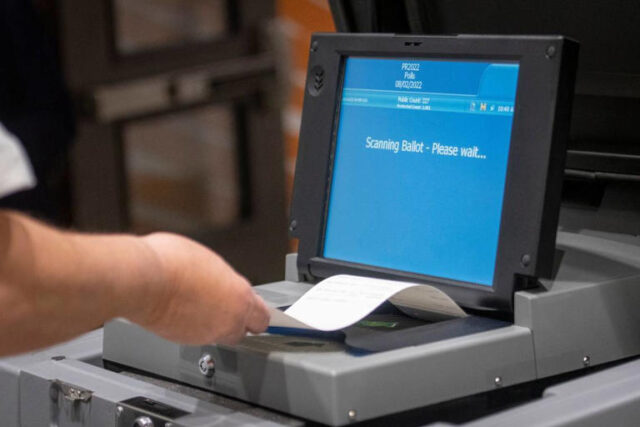 In early September, Johnson County Sheriff Calvin Hayden spoke with a group of Johnson County conservatives known as the “Liberty People” about his efforts to investigate voter fraud.

It was a free-wheeling discussion that included calls for the elimination of all voting machines, unfounded insinuations that undocumented immigrants are voting, and promises that the sheriff was closing in on one of the biggest investigations of his career — despite no evidence of widespread fraud in Kansas’ most populous county.

An hour in, an older woman piped up with an apparent call for action. “Now that I’m older, I’m not afraid to go to jail,” she said to Johnson County’s top law enforcement officer.

Hayden chuckled and reminded her he’s bound by the constitution.

“We are not,” the woman responded.

The episode, posted to right-wing video sharing site Rumble, highlighted a phenomenon that has grown over the past two years in Kansas and the country as a whole. A growing collection of citizens no longer trust the outcomes of elections and promote claims of massive fraud without any basis or proof.

Former Kansas Secretary of State Kris Kobach answers questions from a moderator during a Kansas Chamber of Commerce event at the Embassy Suites by Hilton on Wednesday, Sep. 7, 2022, in Olathe.© Emily Curiel/ecuriel@kcstar.com/Kansas City Star/TNS

Though exaggerated claims of voter fraud are not new to the Sunflower State, former President Donald Trump’s continued refusal to accept his 2020 defeat helped set a fire in Kansas that continues to spread ahead of the Nov. 8 midterm election.

In August, election deniers sought a recount of a constitutional amendment defeated by 18 points and are now seeking a criminal investigation into the state’s top election official. Some of the same people have filed frivolous lawsuits seeking a revote of the 2020 election, the elimination of dropboxes and entirely hand-counted elections. They’re bolstered by a Johnson County sheriff’s investigation and Republican politicians who have indulged the unfounded claims either through lawsuits or legislation.

Kansas Attorney General Derek Schmidt, the GOP nominee for governor, signed onto the Texas-led lawsuit that aimed to overturn the 2020 presidential election. Former Kansas Secretary of State Kris Kobach, who is seeking to succeed Schmidt as attorney general, advised Texas on its unsuccessful effort to invalidate President Joe Biden’s victories in swing states.

As Kansas heads into the Nov. 8 election with one of the most competitive races for governor in the country on the ballot, the onslaught of election denialism poses real risks, voting rights advocates argue.

“The lesson of this stuff being so big in Kansas is really just how dangerous of a gunpowder that’s building here,” said Davis Hammet, founder of the left-leaning civic engagement group Loud Light.

“If (Democratic Gov.) Laura Kelly wins reelection in this context, because of the environment that Derek Schmidt and others built up, there’s gonna be people that believe their government was just stolen from them,” Hammet predicted.

Kansas Secretary of State Scott Schwab answers questions from a moderator during a Kansas Chamber of Commerce event at the Embassy Suites by Hilton on Wednesday, Sep. 7, 2022, in Olathe.© Emily Curiel/ecuriel@kcstar.com/Kansas City Star/TNS

Schmidt’s campaign manager C.J. Grover assured The Star in a statement that Schmidt would accept the gubernatorial results regardless of the outcome.

“Of course the attorney general will accept the certified election results – as he always has,” Grover said. “AG Schmidt has long said that Kansas elections are secure because of the strong work the Legislature has continually done over many years to enact election integrity measures like voter ID, requirements for drivers’ license numbers to obtain mail ballots, and restrictions on ballot harvesting.”

But the stakes are greater than the outcome of any single electoral contest.

As this anti-democratic trend accelerates, election experts and officials from both parties worry about lasting damage to institutions. U.S. Sen. Jerry Moran, a Republican whose own 60-point primary victory is the subject of a lawsuit from his challenger, said Kansas and the country are on a dangerous path as efforts to undermine faith in elections take hold.

“The danger is that we live in a country in which we have to have faith in its institutions. Certainly there are things that need to be changed. We need more information, we need more transparency. There are laws that can improve circumstances. But you need to trust the basic institutions that allow our society to function, that protect our freedoms and liberties,” said Moran, the state’s senior member of Congress and the only Kansas Republican who voted to certify the 2020 election.

“And a constant attack on those institutions diminishes the chances that we continue to live in the country that provides the freedom and liberty that we have today.”

At the Johnson County Election Office, Al Sneller, an employee in the warehouse, moves dozens of boxes into storage that contain ballots, documents and other paperwork from the 2020 general and primary elections, and the August 2, 2022 primary election.© Rich Sugg/rsugg@kcstar.com/Kansas City Star/TNS

In August, an anti-abortion activist and voter fraud conspiracist raised around $120,000 to force a hand-recount of the landslide 18-point defeat of an anti-abortion constitutional amendment in nine counties, including populous Johnson and Sedgwick Counties. The recount covered 60% of the ballots cast statewide. The final results showed only a change in .002% of ballots, an infinitesimally small amount of the more than 556,000 ballots recounted.

Schwab called this evidence of the system working. But the denialists weren’t assuaged.

At least seven lawsuits have been filed seeking a change to the 2020, 2021 or 2022 election results in Kansas.

A lawsuit filed by several Kansas activists in federal court in mid-September makes unfounded claims of voter machine manipulation. Using those claims, it calls for the 2020 presidential election to be rendered void and redone, the elimination of existing voting machines, the elimination of dropboxes, the elimination of Kansas’ three-day grace period for advance ballots and for the launch of a criminal investigation into Schwab.

The lawsuits followed separate suits in Johnson, Sedgwick and Shawnee counties seeking to eliminate dropboxes and block the routine destruction of 2020 ballots.

Gietzen also filed a criminal complaint with the Kansas Bureau of Investigation against Schwab last week claiming the secretary of state violated state law regarding ballot harvesting. The complaint and lawsuits are highly unlikely to advance.

“It’s a joke to have certified the election under these conditions,” Gietzen said without evidence of fraud. He pointed to a delay in Sedgwick County canvassing as a source of his concerns.

Gietzen and Missy Leavitt, who spearheaded the recount effort and are plaintiffs on some of the lawsuits, have focused on a technological error that affected one Cherokee County commission race as evidence that the 2022 primary election was tainted by malware and must be recounted.

Brassart said the thumb drives her office originally received didn’t work correctly when tested and she had to order a new batch. A human error occurred in one thumb drive that caused candidate tallies in that race to flip. No other races were impacted, she said.

The error was identified through the state’s standard post-election audit and Brassart said she planned to update her tech testing procedures to prevent future instances.

“I think some people ran with something that wasn’t truly there,” Brassart said.